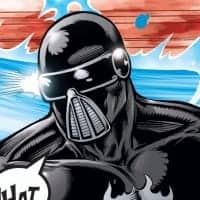 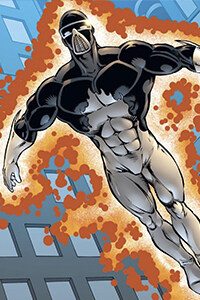 Tom was a NYC policeman who was very ambitious and would work the normal 16-20 hour days trying to get ahead and be a good cop. He was investigating matters the average cop wouldn’t dare touch and came under the notice of Don Tony Baltinetti, the crime boss who controls all of Manhattan and other venues as we learn later. They put a contract out on Tom Wyatt and visited his home late one night to find he wasn’t home. They found Tom’s wife instead. There was a scuffle and Janice was killed. Tom was distraught and took a leave of absence from the force. In the first issue of Shadowflame we see Tom Wyatt at the end of his rope a month after the murder. He attempted to end his own life and instead he found himself transported to a ship orbiting the Earth. The aliens aboard explained that he could not kill himself for he was the last of a chosen line; a family line which possessed the perfect genetic imprint to receive the ‘gift of power’ and become a third holy man of lsht. After hearing the story of Zakraan and his family, Tom reluctantly agreed to take the power. In a painful ceremony he was endowed with powers that set him apart from other men. He was now a superman, capable of vast feats of strength, flight, telekinetic force bolts and all the rewards of being a holy man. This gave him not only great powers, but a reason to live.