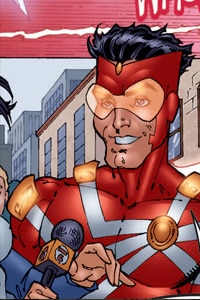 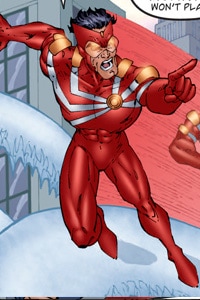 Rush and his sister Gwen Godwin (Reactor Girl) are the only known offspring of Alphaman, the premiere superhero on Earth. Unlike his sister, who inherited all of their father’s powers, Rush inherited only superhuman speed. However, it should be noted that the nuclear reactions that take place within his body which give him his powers are fully and safely insulated. (This is not true for Gwen, whose body will leak radiation when she exerts her powers beyond a certain threshold.) Rush has some anxiety about running on the freeway, this stems from an incident from his childhood when he caused several traffic accidents and had to be rescued by his father. Since then, Rush tends to avoid the freeway whenever possible.