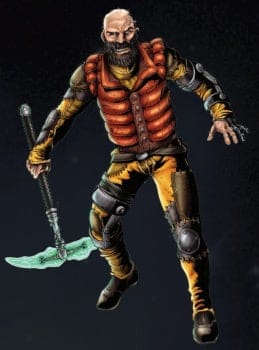 Cranky bastard and seasoned miner, Jo-Jo has been through the wringer about 25 times. He’s scarred, battered, bruised, and crass, but he’s the most dependable guy on the team. He’s not even 50, but the hard living of ZG mining has taken a hefty toll on his body, but more sore muscles and stiff joints won’t stop him from doing what he loves, making money… breaking rocks is kind of fun, too. He comes from a family of miners, and even had his own ship once upon a time… it was torn apart as an unstable asteroid’s gravity plane shifted after a planned explosion. If the demolitions team had survived, he would have fired them.