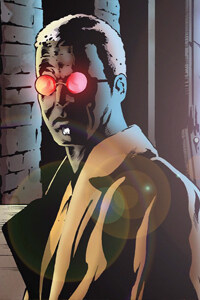 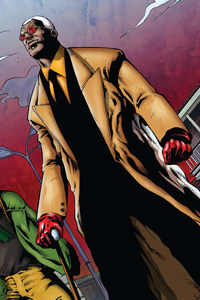 Born in the American south in 1898, Ishmael Stone went on to serve his country during World War I. It was only after his return, however, that he began to learn the true nature of his power and his destiny. Nearly murdered by a racist policeman driven to insanity by the sight of Stone in his military uniform, Stone was rescued by the Network—a global collective that inducts agents into its ceaseless fight against chaos, entropy, madness, and monsters—and eventually rose to become its leader. Stone’s special abilities are elemental in nature. He controls fire, water, ice, and storm. His magic is the magic of the natural world, and he is vulnerable only to magic that cancels out or disconnects him from that world. He carries the Ouroboros Staff, symbol of his power and authority, and he can summon to his aid the spirit of a great Hell Hound, which he also treats as a pet.