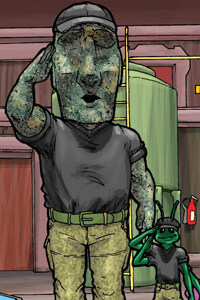 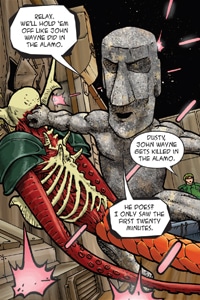 “Dusty” is complicated. The first alien to arrive at the base via the dimensional transporter developed by the Professor and “Gil.” They tried to keep “Dusty” under wraps, but eventually the alien was spotted on the base, stealing kegs of beer. The Professor, playing on “Dusty’s” resemblance to the Easter Island relics, concocted a story that the alien had been hibernating beneath the base and recently woke up. The General bought it and placed the alien in the Professor’s care. The name “Dusty” came from the Professor noticing the alien drank like his former brother-in-law. It has recently been revealed that “Dusty” is a female.