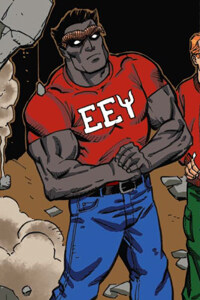 Brutal is a co-founder and the President of Epsilon Epsilon Psi – the “Hero House” fraternity for super heroes at Bay State University. Brutal’s superhuman strength and monstrous appearance manifested themselves while he was in high school and briefly sent him down the wrong path, until a teacher who was a former super hero became a mentor to him and set him on the right path. Upon arriving at college, Brutal co-founded the Eps along with his friends Oz and Poltergeist, and Brutal became the President of the fraternity.