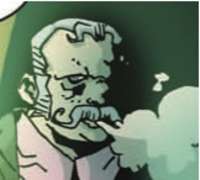 While he lived, Albert was a morally corrupt policeman who took what he wanted and enjoyed a lifestyle that wasn’t his. He found hope for redemption in Mary, a simple girl who became his fiancé. After being beheaded in the slaughterhouse of a madman, Valentine found the same work waiting for him: chasing down crooks, keeping the law. Valentine has taken to it with the same slanted view he kept in his mortal days. He is corrupt as the day is long; and in the afterlife, the day never ends.